To find out more about cookies, what they are and how we use them, please see our privacy notice, which also provides information on how to delete cookies from your hard drive.

What is blockchain? Exploring the fact and fiction

Distributed ledgers have grown beyond their cryptocurrency roots and the once-emerging technology is at last ready for your business to put it to work right now.

Blockchain, the technology behind the bitcoin digital currency, has broken loose from its origins. Given the explosion of interest in blockchain beyond financial services across utility, transportation, business and governmental industries - it is gaining momentum.

The days of talking about blockchain's potential have passed and organisations around the globe are not just building proofs of concept but many are already using it for live applications. Blockchain is being rolled out across sectors from energy supply and property sales to facilities management, environmental provenance and container shipping. However, the technology remains surrounded by a mist of uncertainty.

To bring some clarity and pragmatism to our understanding of the technology, and evaluate how it can benefit an organisation, we need to remove it from its digital currency origins.

The genesis of bitcoin

In 2009, in the wake of the worldwide financial meltdown, an anonymous developer(s) using the moniker Satoshi Nakamoto created an alternative, digital-only financial currency called bitcoin.

Bitcoin was designed to enable simple financial transactions to take place between its participants, completely independently of banking institutions. Each transaction is recorded and validated not by a bank, but by the software architecture of the transaction system itself.

What is blockchain technology?

It's essentially a live ledger that records the transactions of a 'token' – in this case, the bitcoin currency – arranged in data batches called 'blocks' that use cryptographic validation to link themselves together. Put simply, each data block references and identifies the previous block using a 'hash' function, forming an unbroken chain, hence the name.

This approach to recording data boasts a significant advantage over traditional financial ledgers and databases. By having every data block validate its direct predecessor, the ever-lengthening ledger is strictly sequential and permanent: it's not possible to amend, mask or delete transactions that have already been recorded. Any attempt to do so would break the cryptographic chain and be immediately flagged to all participants.

In principle, a blockchain ledger is a tamper-proof database with built-in validation.

The distribution of blockchains

The second key feature of blockchain is that the ledger is not maintained in a single location or managed by a single, monopolistic third-party. Instead, it is said to be 'distributed', existing on any number of computers at the same time in such a way that anybody with an interest can obtain a live copy of it.

As such, blockchain is sometimes referred to as a 'mutual distributed ledger' or MDL. It employs this mutual consensus mechanism across the network to guarantee trust in the whole system.

"Blockchain is based on a distributed, decentralised paradigm technology which allows the exchange of any kind of value between peers without using intermediaries" summarises Luis Pastor, partner of IT consulting and innovation at Grant Thornton Spain.

"The magic here is that you don't need a third party to make sure that what is happening in the network between peers is correct."

Staying with the digital currency concept, this would enable you to send money from, say, one country to another without having to pass through a clearing house. Rather than taking two or three days for the transaction to be validated by a third party, the sender and recipient are automatically identified by their encrypted digital signatures, the money is transferred from one wallet to another and the transaction is recorded to the ledger within seconds.

"With blockchain," says Pastor, "we can represent any kind of value through tokens. In the financial world that could be a bond or a share, or property such as a house. The whole network, using its consensus mechanism, would validate the transaction to transfer the ownership.

It would be possible to represent any real-world asset as tokens on a blockchain. Once a network is created with different parties, these assets are going to be unique. The concept of ownership is really strong and made clear to everyone playing by these rules on a blockchain network."

Applications beyond so-called cryptocurrencies were first proven with the development of the Ethereum blockchain platform in 2013. Although the Ethereum eco-system encompasses its own digital currency known as ethers as its token, the platform introduced the ability to include not just basic numeric records but also small logistical programs into your ledgers.

These are known as 'smart contracts'.

"These allow you to make arrangements or agreements between parties," says Pastor, "for example, to send funds on a certain date or to make changes to an asset's properties.

Another classic example of a smart contract in action might be the concept of insurance for delayed airline flights. When a traveller buys travel insurance for a specified flight, the purchase could be recorded in a blockchain. This smart contract is designed to check automatically with an external data source whether that flight suffers any delay and, if appropriate, pass a compensation payment straight to the traveller's wallet without the usual administrative overhead.

The potential for business-oriented blockchains has attracted the interest of big names in the IT industry far beyond its hacker roots. Microsoft customers, for example, can try out their own blockchain proofs of concept on its Azure cloud.

It's important, then, to recognise that there is more than one way to implement blockchain.

A key concern with raw blockchain is that its distribution aspect can be a disincentive. That is, a group of parties with an interest in establishing a blockchain to record industry-wide transactions may well be competitors willing to share limited privileged data flow with each other, but not with the public at large.

This need has led to the development of private blockchains, sometimes referred to as 'permissioned ledgers'. These are protected by security barriers and made available only to interested parties with permission to access the data.

With a private blockchain, richer data can be recorded into the ledger that might otherwise breach data security requirements laid down by regulatory bodies. Bitcoin's blockchain, for example, records transactions and wallet references as public keys but contains no personal information as to whom the wallets belong.

One concern about blockchain is that it is energy-intensive. Being the first major system based on the technology, bitcoin is arguably the worst offender.

Trust in blockchain is centred around data miners to keep the system up and running, for which they earn a small fraction of newly minted bitcoins, but the server farms employed in the relentless data mining process are said to chew through as much energy as a small city. Many of these server farms are operated in China, whose rising carbon emissions are a matter of record.

Add to this the energy requirement of every bitcoin owner to keep their wallets updated with the current version of the ledger, to which new blocks are added every few seconds, and you're talking about a lot of electricity. It has been estimated that a bitcoin transaction can be as much as 5,000 times more energy intensive than a Visa credit card transaction.

That said, these costs are offset given that blockchain allows for real time transactions and information sharing and, hence, little or no intermediary costs.

As a result, organisations that have been spending the last couple of years investigating blockchain have now begun taking their systems live and bringing customers and competitors alike into the fold. With the promise of speeding up data flow and removing administrative overheads, blockchain is as much about streamlining processes as just cutting costs.

In our next two articles, we look at the businesses currently active in the roll-out of real-world, commercial blockchain solutions, as well as practical steps explaining how to set about introducing blockchain into your own organisation.

There used to be a joke that the most common software employed in blockchain development was PowerPoint. 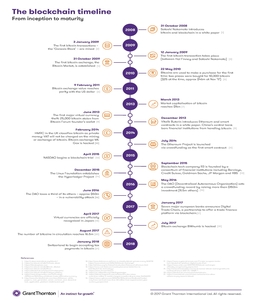